Latest updates from the campaign:

WSET reports on the Republican Candidate Forum at Liberty University

Come enjoy all you can eat pizza and salad, sign the petition to get Alissa Baldwin on the ballot for the June Republican Primary (if you're a registered Virginia voter), and share in conversation with the candidate.  This family friendly event is a campaign fundraiser intended to also educate and engage the people in the 2020 election cycle where conservative values and constitutional principles are tremendously at risk.  We the People need someone to fight for faith, family, and freedom, and Alissa Baldwin is the one to trust as a native Virginian and civics teacher focused on genuine public service and not selfish political ambition.  Tickets are available online or at the door.  RSVP is strongly encouraged.

Alissa Baldwin stood with other strong intelligent capable women leaders during a press briefing on Wednesday, January 8th, by The Family Foundation Virginia to speak against the ERA.  Women are already created equal by God, albeit with unique biological differences, and protected under the US Constitution.  The ERA deceptively touts equality while it actually opens the door to abortion on demand even at taxpayer expense, increased federal government involvement in local and state matters, and harms women and girls in a number of ways (ex: sports teams).  Baldwin also spent much of the day lobbying legislators in the General Assembly.

Baldwin Signs Pledge in Support of Term Limits for Congress

PRESS RELEASE - Alissa Baldwin signs pledge to support Congressional Term Limits - Baldwin says, "Public servants and not career politicians are what the people of Virginia deserve. I've lived here all of my 41 years and counting so we don't want DC swamp creatures claiming to represent us."

FOR IMMEDIATE RELEASE
CONTACT: BaldwinForUnitedStatesSenate@gmail.com
Alissa Baldwin Announces Candidacy for US Senate 2020
Alissa Baldwin of Lunenburg County, Virginia, recently announced that she is seeking the Republican nomination to run for the US Senate seat in the 2020 election cycle.

This is a "What Matters Wednesday" message from the people's candidate for US Senate (VA), Alissa Baldwin.

*Paid for and authorized by Baldwin for United States Senate*

Friday was an exciting day for the Baldwin for United States Senate campaign committee.  We became not just "Facebook official" but government official with the filing of FEC Form 1 (Statement of Organization) and FEC Form 2 (Statement of Candidacy).

With the official first FEC filing done ✅ there is NO stopping us as we come together in support of our Constitution and conservative values to help Alissa Baldwin become the Republican nominee for US Senate (VA) in 2020. 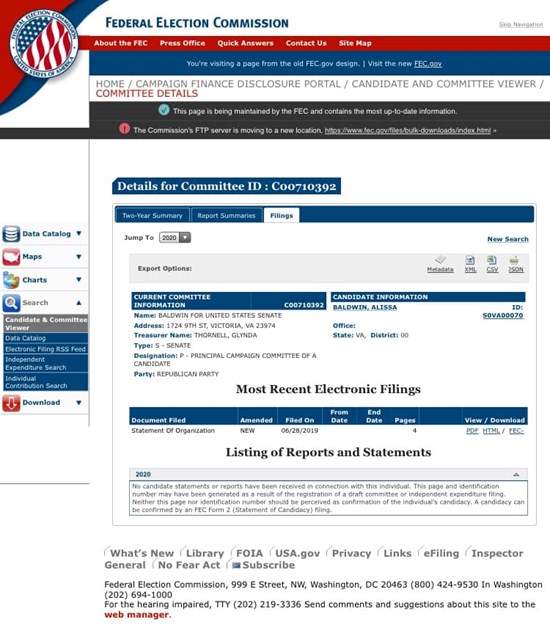 WSET reports on the Republican Candidate Forum at Liberty University